A “legendary” US Naval Fighting Ship, The USS “Missouri” was the last American Naval Battleship built and the longest serving. Having been commissioned in 1940. She was not launched however until 1944 (during the last year of American involvement in World War II). She served until she was decommissioned in 1992. Nicknamed “Big Mo” and “Mighty Mo”, The “Missouri” served in every American War and Conflict from 1944 onward.

An “Iowa-Class” Battleship, “Missouri” came into being when America had already began to establish a victorious presence in The Japanese held Pacific. America had switched it’s battle plan to Aircraft Carrier tactics. The need for Battleships had already been established as obsolete. However, the heavy “hitting power” of The Battleship was still needed against many heavily fortified Japanese island positions. The USS “Missouri” was first tasked with artillery support of The Marine Invasion of Iwo Jima in 1944. She later supported the Invasion of Okinawa. She was also one of the last “victims” of a direct Japanese suicide “Kamikazi” Plane attack. In an unusual case of “Naval Honors” (at a time when Japanese sentiment was negative), at the time of the crash – as was customary, the wreck was thrown overboard but the body of The Japanese Pilot was recovered. The Pilot was given a burial at Sea with full Military Honors.

“Missouri” stepped into the pages of History when she was chosen to move into Tokyo Bay, Japan after the dropping of the Atomic Bombs – which ultimately ended World War II with The Japanese Empire. The Worlds Allied Representatives all met on her Decks for the signing of The Instrument of Surrender in August, 1945. “Missouri” was not decommissioned, but assigned to The Atlantic Squadron. She was pressed back into “War Service” with The Korean War of 1950-1953.

Supporting many actions during that War, She was decommissioned in 1955 and became an “Active” Museum Ship (along with other famed World War II Ships), at Puget Sound Naval Yard in Washington State. She would remain as such for 30 years. In a highly unusual step of “fate” for “Missouri”, President Ronald Reagan ordered her renovated for modern Naval Warfare in the 1980s. She was completely retrofitted and recommissioned.

The “Missouri” saw her last engagements during The Gulf War (1991), when she provided artillery support against assets in Kuwait. After The War (and the collapse of The Soviet Union), “Missouri” was again decommissioned as a Naval Museum in 1992. She was berthed in Long Beach California until 2009, when she was moved to Pearl Harbor, Hawaii. Placed on “Battleship Row”, where the original Pacific Fleet was sunk by the surprise attack by Imperial Japanese Forces in December of 1941 – she is near the remains of The “Arizona”. The placement highlights the “start” of World War II (“Arizona”) with it’s end (“Missouri”).

Her statistics have changed greatly since 1944. Her World War II Armament included her massive (9) 16-inch Main Guns, (20) 5-inch Guns and (80) 40mm Anti-Aircraft Guns. “Missouri” boasted between 5 and 19-inches of Armor plating throughout her super structure. She was crewed by over 1,800 Men. Later, “Missouri” would be configured to support The Tomahawk Cruise Missile System, as well as some of the moist advanced Naval Navigational equipment available. “Missouri” is 887-feet long with a 102-foot Beam. She displaces 45,000-tons. “Missouri” can achieve 55-mph. She is one of the few Vessels to achieve 11 “Battle Stars” for Actions in Naval Combat. 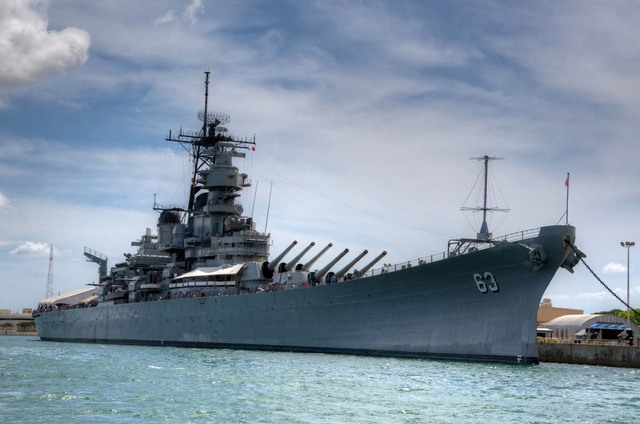