No official Award was created for US Pilots who fought in World War I. Many Pilots who first volunteered to fight in England's and France's Air Corps, had earned those Countries Flying Awards (and were allowed to wear them). It was not until 1927 that the Distinguished Flying Cross was created. Retrograded to be issued to all Pilots and Crewmen who served from 1917-1919 in World War I, the award is designed as a large multi-winged plane propeller. Set on a squared radiating line design, an stylized Maltese Cross in superimposed behind the device. The cloth portion of the Medal (ribbon) is Blue and Orange. It is still issued to US Army Helicopter and Fixed Wing Aircraft Pilots and Crews. 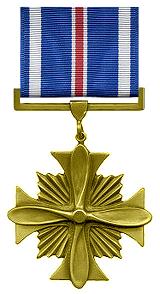