The Model 26 Tank, nicknamed "The Pershing" (after WW I General John J. Pershing), was the premier heavy battle Tank of the US Military during the final year of World War II. Deployed in 1944, The M-26 was conceived to be the adversary of Germany's vaunted "King" Tiger Tank. Lessons learned from The Battle of The Bulge, showed a disproportionate amount of US Armor falling prey to Germany's main Tank gun, The 88mm. The "Pershing" was provided with a 90mm main gun, featuring a 17,000 meter effective range (using High Explosive rounds).

The M-26 weighed 45 tons and was 20 feet long. At 12 feet in width, it could crew 5 men. In addition to the 90mm gun, she was armed with chassis mounted twin .30-06 Browning Machine Guns plus an exterior Turret mounted .50 cal. Heavy Barrel Machine Gun. The M-26 was an improvement over lighter Armor plating, featuring 2-inches of plating. The Tank had superior suspension and handling over it's predecessors. It could achieve 25 mph land speeds and go for 100 miles before refueling. Due to late deployment, The M-26 saw only limited service in Europe (1945). It would however, go on to service in America's involvement in The Korean Conflict of 1950-1953. Although replaced with the advent of better Armor and technology, many "Pershings" would continue to be counted in the inventory of many US State Army National Guard Units, we'll into the 1970s. 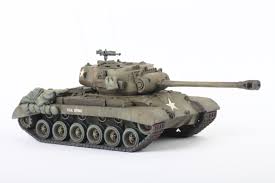