First created in 1915 by the US War Department, The "Army of Occupation of Cuba" Medal, was designed for award to US Army Personnel who served in Cuba after The Spanish-American War of 1896. Retroactive to 1902 (when American Forces left the Island Nation ), it wad issued (rarely to specific Units of The US Navy and Marine Corps). The cloth Ribbon was a multi-purpose Stripe Red and Blue  (with a Yellow boarder). The Device Front featured The Coat of Arms of Cuba (recently created), with the reserve bearing an American Eagle image. The inscription of "FOR SERVICE, UNITED STATES ARMY", was placed (Rear). A very common Ribbon in it's day, it was seen worn by Senior Officers and Enlisted Men, as late as World War II (1940s). 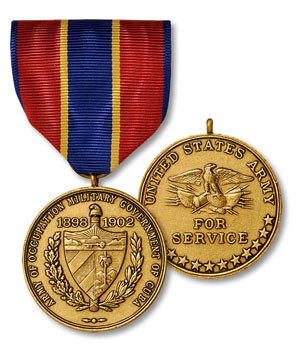