Evolved from early American-British Colonial Forces involved in The French and Indian Wars of 1756 – in North America, The Rangers were a highly specialized Military Unit that combined both traditional and Native American fighting tactic. Experts in both ambush and close combat, The Rangers have existed in one form or another throughout American Military History. Despite their effectiveness, The US army never formally created a “standing’’ Ranger Regiment until 1956. Upon which, they were issued their own Colors. The Flag of The 75th Infantry (derived from the WWII 475th Composite Infantry), was the traditional Blue Field (Infantry). Centered, is the Federal Eagle in full color. Above and below The Eagle are (2) Bannerolls, which give both The type and numerical designation of The Regiment (United States Army, 75th Infantry Regiment) as well as the well known and iconic battle cry of The Regiment ''Rangers Lead The Way''. 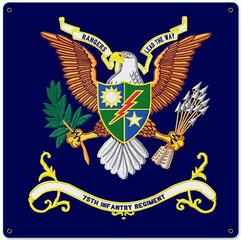