Located on The Thames River near Central London, England - The Tower of London is one of Britain's oldest defensive structures. Built by William The Conqueror in 1078, The Tower (as it is known), was a symbol of Norman oppression. Used as a prison from 1100 to 1952, it was originally built for Royal inhabitants. Actually composed of several interior structures with a concentric defensive design, it features a defensive tower system and Moat. The Tower and it's structures encompass 12 acres. The central "White Tower" was designed (and used) as home to many English Royalty. The current defensive perimeter wall was slightly taller in Medieval times. It has been reconditioned many times in it's history since the 12th Century. The current condition of The Tower is from the 13th/14th Century. The Tower served as The Royal Mint, a Records Office, Armory and Treasury. It currently holds The Crown Jewels and Symbols of State. Many famous and infamous persons were tortured and executed at The Tower (which by some accounts say is haunted). Damaged badly during World War II, The Tower was repaired shortly after 1945. The Tower of London is a primary site to visit for foreign Tourists to England. 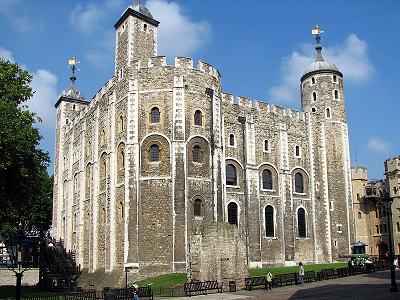