Also known as The ''Prince's Colors'', was a Flag so named for Prince William I (aka Prince William of Orange). First seen in 1577 on occasion of The Dutch Revolt (1568-1648), Prince William declared a ''Dutch Republic'', hence using this Flag to identify it. The Flag would become the official Ensign of The later Dutch Navy beginning int the 17th Century (with variants). It can still be seen in form, used by various Countries, Cities and Counties throughout The World. The Flag is a modified Tri-Color of (3) horizontal Stripes of Gold (top), followed by a White Stripe (center) followed by a Blue Stripe (last). No other imagery was used on The Prince's Flag. Used until the 1930s and the rise of Socialism (which adopted The Prince's Colors as their symbol for their political Party), a Royal Decree from The Dutch Monarchy ordered the top Gold Stripe changed to Red. It has remained as such since 1937. 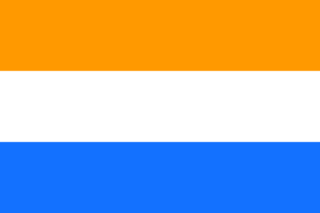