The Siege of Exeter was said to have happened in October, 630 A.D. - the conflict involved The Kingdom of Mercia (now The English Midlands), which was ruled by King Penda and The Britons (who controlled Exeter, then called Caer-Ulsc), of the Kingdom of Dumnonia (now portions of Devon and Cornwall). One version of this story is that the Britons King Cadwallon up Cadfan (who had been living in exile, no doubt due to his reported tyranny), assembled an army against Mercia. Advancing on Exeter, as was the custom - a parley truce was called. Penda and Cadwallon entered into a truce and and aligned themselves (no doubt to Penda's offering his daughter to Cadwallon). Another version, has Cadwallon launching a bloody battle against Mercian forces - which had Penda offer the same truce and alliance. (it probably depends on which side you were on, for the correct story). This truce and allignment of the now Mercian-Dumnonian Army will lead to an assault on all things Northumbrian.

The Battle of Cefn Digoll (again sometime in October, 630 A.D.), will result out of this. Fought near Long Mountain is Welshpool (today Wales), the Northumbrian Army of King Edwin and The Alliance battled. This engagement was a victory for The Alliance. It further removed Northumbrian control in the area. Obviously Cadwallon (mastermind of the campaign), could not have accomplished this without the Mercian forces. This morale booster will next lead to The Battle of Hatfield Chase, (near modern South Yorkshire, England) - near the town of Doncaster, October 12, 630 A.D.

Ediwn (still licking his wounds), drew up his forces in the marshlands outside of Doncaster - awating The Alliance. The battle was one-sided. The Northumbrians were slaughtered, including the battle deaths of Edwin and his sons. Without a bloodline, the Kingdom would be split between Bernicia and Deira. As this went, Aethelfrith (former King of Bernicia), returned to claim his vacant throne. All this was naught for Cadwallon. He continued with his campaigns against anything that was "surviving" Northumbrian. Many towns and villages fell. He had to be checked. And he would at The Battle of Heavenfield - in 633 or 634 A.D.  Oswald of Bernicia (son of Aethelfrith), advanced to Hexham (now Northumberland, England). Oswald's forces (assisted by Scottish mercenaries), engaged Cadwallon. Unable to turn their flanks, Oswald's forces had to resort to a full frontal assault. So great (and suprising) was this tactic, that it panicked Cadwallon's troops and they began to retreat. Oswald's forces continued forward - slaughtering them as they retreated (including Cadwallon!).

Oswald would re-establish Northumberia control over the region (reigning as King). More importantly, Oswald would bring back Christianity to the region. 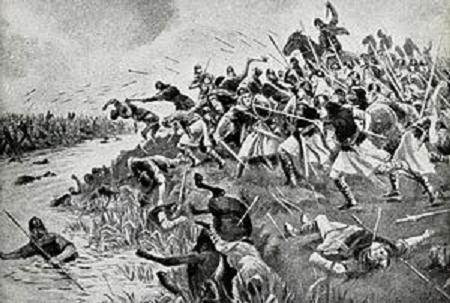