Built possibly on 1495, The “Matthew” was a Caravel-Class Ship built in Bristol, England. Readied for sail in 1497, she was used by Portuguese Explorer John Cabot who had been commissioned by England’s King Henry VIII to Map The Coast of America “The New World”, for future Colonization. Weighing 85-tons, “Matthew” was 78-feet long and 20-feet tall. She featured multiple Decks and crewed 18. She also mounted several Swivel Guns. Cabot made landfall in June of 1497. Completing his Mission and returning in 1498, no further History of The “Matthew” is recorded and her fate is unknown. A full sized replica was constructed in 1997 to commemorate The 500th Anniversary of her voyage. 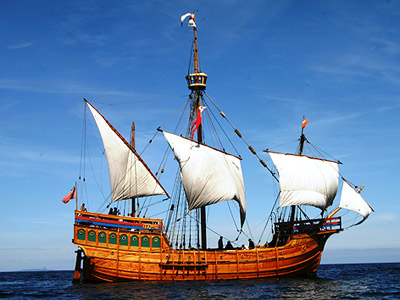