Originally built in France as a French East Indian Company Trader/Commerce Ship. Christened The “Duc de Duras”, she was launched in 1766. Sold to the fledgling American Colonial Navy in 1779 as renamed The “Bonhomme Richard”. The Ship was given to John Paul Jones to command. She displaced 998-tons and was 15 3-feet long. Her height was 40-feet. Classed as a Frigate, The “Bonhomme Richard” crewed 380 Men. Her armament included (28) 10-pound Cannon, (6) 18-pounders and (8) 9-pounders. The “Bonhomme Richard” joined a small Fleet of French Support Ships and engaged several much larger British Warships at what would become The Battle of Flamborough Head, off The Yorkshire Coast in The North Sea (1779).

Outclassed, The “Bonhomme Richard” fought on for 10-hours. Absorbing Broadside after Broadside, She was critically damaged and sinking. The British Commander called for Jones surrender. He was alledged to have said, “I Have Not Yet Begun To Fight!” Although a tactical victory for The Royal Navy, the bravery of The “Bonhomme Richard” would say French opinion towards official recognition of America in her War for Independence. The “Bonhomme Richard” sank with half of her Crew lost. Jones would survive to become one of America’s Revolutionary Heroes. 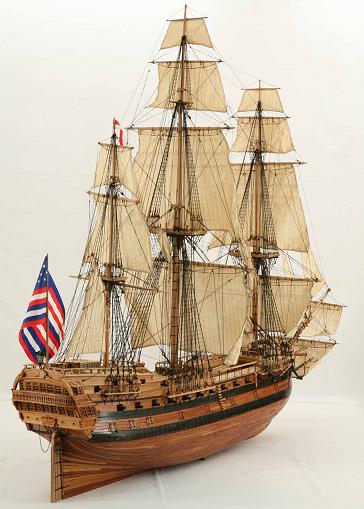