The Battle of Worcester

The final major battle of The English Civil War, The Battle of Worcester was fought on September 3, 1651. England's King Charles II (who had returned to Britain from exile, after Parliamentarian Forces had defeated His Father, Charles I Army – tried and executed Him), raised a Royalist Army of 16,000 effectives (mostly recruited from Scotland). Hoping to defeat The Parliamentarian Army of Oliver Cromwell, now known as The New Model Army and numbering 28,000 effectives, the decisive battle turned into a bloodbath for The Royalists. The two Combatants need on the outskirts of the Southwestern City of Worcester, England.

Forming Lines along The Severn and Fleetwood River, Cromwell's Forces advanced ''en masse'' in a crashing Infantry assault, supported by artillery, against Highlander Infantry. Pounded, The Scots would not immediately yield. Soon supported by Royalist Cavalry (who attempted a flanking movement), this ploy was too countered by Cromwell's much more adept Cavalry. Towards The Eastern portions of The City, The Royalist Forces established a series of Redoubts (small Forts). Here they rallied. A combined ''prong'' of (3) Formations converged on The Redoubts and eventually forced a retreat. Charles II was almost captured, but removing His Armor and assumed the disguise of a ''Common Soldier'', He was able to escape just minutes of Parliamentarian capture.

3,000 Royalist were killed and wounded and an estimated 10,000 were taken prisoner. 8,000 of these were forced into slavery in The Caribbean. Charles II would go back into exile, His hopes of a quick victory dashed. He would remain as such until the eventual collapse of The Commonwealth and re-establishment of The Monarchy (The Restoration) in 1660. 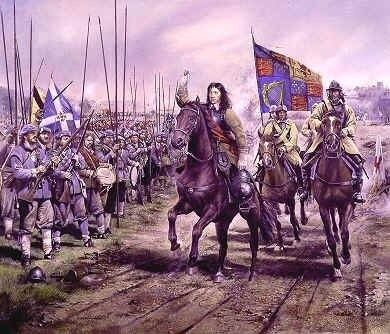