The Battle of Reading

Fought on January 4, 871 A.D. - the forces of Aethelred of Wessex and Alfred The Great, fought an invasion of Danelaw Norsemen - at Reading (now Berkshire, England). Both sides fought with great determination and honor. The Danish Army (Norsemen), having initiated an invasion of The Kingdom of Wessex - establish a war camp outside of Reading. They controlled the Thames and Kennet Rivers. Now having a base of operations, they started their raids against the surrounding towns. They encountered Wessex forces outside of Englefield and engaged them in a pitched battle there. The Wessex troops won this encounter and sent the Danes back to their war camp.

Four days pass. The Wessex forces were supplemented by Aethelred's brother, Alfred The Great. Now the entirety of the Wessex forces marched on the Danish Army. The Norsemen had taken control of a small stone fortification, near Reading - and were entrenched there. Alfred's Army fell upon the front of the Norse fortification - in a frontal assault. Both sides fought fervently. Slowly but surely, Alfred's troops breached the stronghold. Now inside the walls, the fighting was hand to hand. Both sides bloody, the Wessex numbers were starting to dwindle. Unable to maintain his momentum, Alfred had to withdraw. It was not until The Battle of Ashdown on January 8th, (of the same year), that Alfred and his forces would stop the Viking advance. By late 871 A.D. - they would leave the region altogether - retreating for their Winter camps outside London. 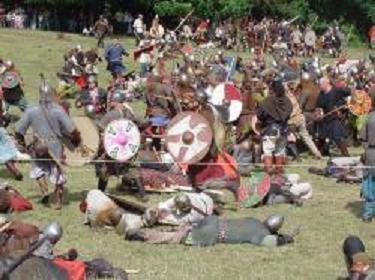