The Battle of Nevis

The Battle of Nevis is sometimes referred to as The Battle of The USS “Constitution” vs The L'Insurgente (a French Ship of The Line). The battle was the result of The Quasi-War (an undeclared “War” between America and France fought from 1798 to 1800). The War developed over America's refusal to pay France for their part in helping them “win” The Revolution against England). Many reasons for the default have been put forth by Historians. What is known is that hostilities (mostly fought on The Sea), cost America the “small” amount of nearly 100 killed. Shipping was slightly worst. While only 1 Ships of The Line was lost (later recaptured), a Fleet of over 22 Privateers were lost and over 2,000 Merchant Ships were either captured or sunk. Not to be undone, even England and Spain (unofficially) were involved in The War (to a small degree and both mostly taking advantage of the confusion to raid both American and French interests).

The Battle of Nevis (a small South Caribbean Island) – was the scene of the first “official” victory of a US Naval ship against a foreign enemy. The ship, the soon to be “storied” USS “Constitution”, encountered the French Warship “L'Insurgente”, attempting to raid US shipping interests in The Caribbean. Armed with 38 cannon of various poundage, The “Constitution” wasted no time in firing upon their target. Similarly armed with 36-guns, “L'Insurgente” turned to and defended herself. Broadside tactics being the order of the day, the 2 ships weaved and broke from each other many times. The unusual tactic (almost akin to a boxer's “bobbing and weaving”) - gave the much better American Gunners the advantage of better placed (and timed) shots at the French Warship. Eventually, “L'Insurgente” suffered most of her sail work being torn to bits. After 1 hour and 15-minutes, The French Commander surrendered his Colors. Taken as a prize, she was renamed The USS “Insurgent”. The loss of the ship was a major blow to French morale (thinking their Navy unbeatable). It was also a major victory for the young American Navy. 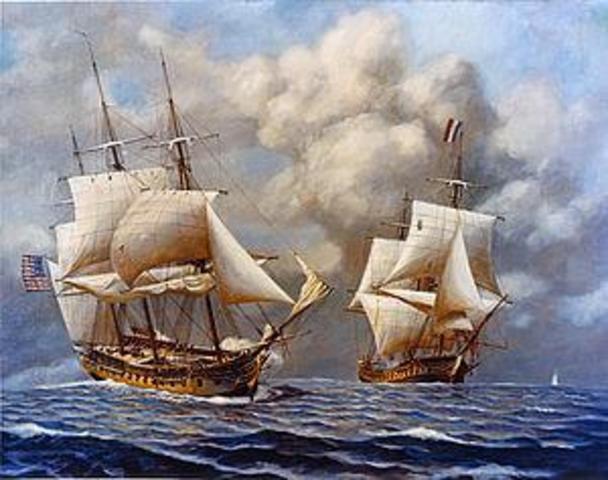