The Battle of Marciano

Part of The Italian Wars of 1551, it was fought on August 2, 1554 - between an alliance of Florence, Spain and The Holy Roman Empire and The Republic of Siena (with French support). With Emperor Charles V support, the de'Medici Family initiated a military campaign to capture The Republic of Siena. His rival, Piero Strozzi (commanding the Army of The Republic) - had began to move his army. Gian de'Medici landed his army pf 20,000 (in three armies), in Southern Tuscany. They immediately began to capture villages and towns within the region. Noting the size of the armies, Strozzi requested help from it's ally (The French). The French had no problems involving themselves in this "war".

de Medici (in his campaigns against Tuscany had ousted many French nobles. Almost immediately, the French Navy began to bombard the Florentine positions and disrupt de'Medici's supply lines. Not undone, he immediately "hired" more replacements and asked for help from Imperial Rome. French reinforcement landed in support of Strozzi. Both sides met in the surrounding countryside of Marciano. Strozzi turned his 1,000 strong cavalry onto the Florentine's army flanks. Positioning his other troops on surrounding hills (the high ground), he awaited his cavalry attack results. Unknown to Strozzi, de'Medici had successfully bribed several cavalry commanders to turn sides. Seeing this betrayal, other units of Strozzi's began to retreat. All but the German mercenaries. They proceeded through the valley and straight into the Florentine artillery. Massive gaps opened in their ranks.

With no troops to reinforce their losses, the battle was lost. Strozzi was wounded several times and had to be removed from the field by his bodyguards. Some 4,000 casualties were recorded and another 4,000 captured. With further resistance, The Republic of Siena would cease to exist by 1559. 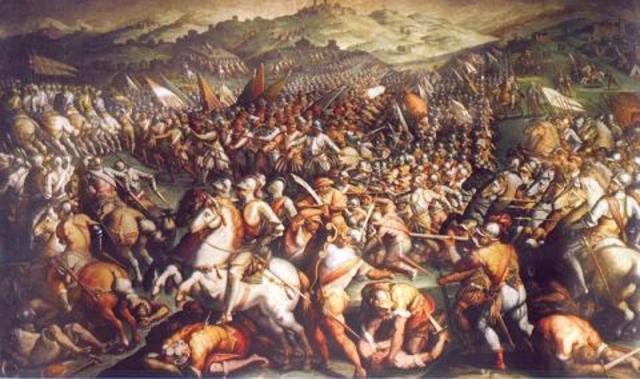