This battle was part of The Transalpine Campaigns of The Swiss Confederation against Northern Italy. Fought on April 28, 1487, some 7,000 Swiss (sent from 2 Swiss Principalities - Lucerne and Valais) - they engaged 3,500 men  from The Duchy of Milan. Invading from the North part of the country, (Italy) - the Swiss set about numerous sieges of any forts or castles encountered (with great success). They also burned and razed villages and towns (after suitable supplies and loot were removed). The Swiss Confederation had already made a name for themselves among the local populace (and it was NOT good). In a staying tactic, the Duchy of Milan began to enter into false negotiations for peace with the Swiss. This seemed weak but they were really preparing their army. 3 Corps. of Duchy forces were raised to engage the Swiss near Crevola.

Undeterred by the Duchy's forces, the Swiss formed into their traditional square formations. Although well trained soldiers, the onslaught and lack of mercy by the Milanese soldiers was telling. Some 1,000 Swiss were killed. And not forgotten were the peasants. They desecrated the Swiss dead by cutting of heads and fingers. The fingers were worn as decorations and the heads were "piked" in local towns. This apparently worked, for now the Confederation rapidly entered into negotiations with Milan in July of 1487. 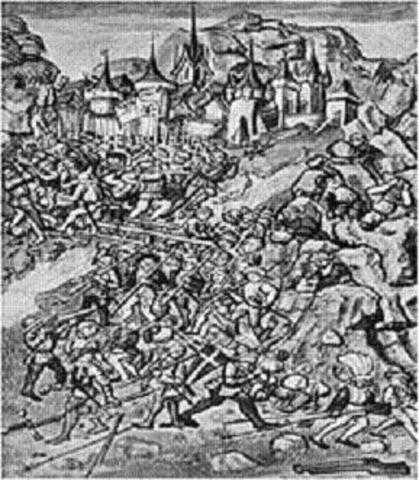