The ''10,000'' is a numerical designator given to an Ancient Greek Mercenary Force – used in the attempted usurping of Persian King Artaxerxes II by His Brother – Cyrus The Younger. A composition Force, the majority of Mercenaries came from various Greek City States. Legendary Greek Leader Xenphon was once their Leader. The Force consisted of Infantry and Cavalry Branches. In addition, The Force had as many as (35) Triemes – as a make-shift Navy.

Sent on a forced marched into Persia, The Force was improperly supplied, which caused many to stall their advance. Using foraging to supply The Force, they would move on to fight The Royal Persian Forces at several key battles between 401-399 BC. The Force was noted for it's ruthlessness in battle.

Spartans, Syracusian – many City States provided ''paid Forces'' for The ''10,000''. However, running out of foraging and still awaiting supplies from Byzantium (which never came), The Force would slowly disband after several several years (after a loss of 4,000 through casualties and disease). Cyrus was unable to wrest control from His Brother. 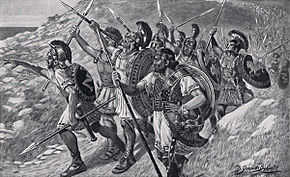