“War” or “Warlike” the image of a Sword or Swords was a very common Military image with Crests and Shields. They were shown to impart a Military lifestyle (normally as a Leader or Commander). Many Sword images developed out of The Hundred Year War (especially in England). Swords could take up an entire Field or be crossed – with more that one having to real importance. Coloring or tincture was often natural, but some examples were in vibrant coloring. More Modern Crests (after the 18th Century), still used Swords with Military Leaders – to identify their achievements in battle. 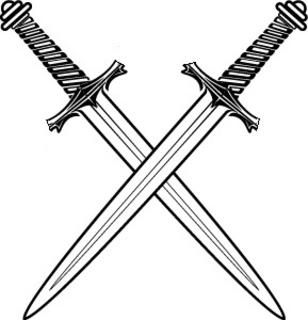