Swedish Order of The North Star

Created by King Frederick I (Sweden) in 1748 – The Order was designed to award excellence in Sciences and other acts towards The Kingdom and Monarchy. Seen as a rival to France's Order of St. Michael, initially it was only awarded to Nobility (and then only those who directly served The Monarch). It is now only awarded to Foreigners and Royalty. Shown as a Silver Star, set over a larger Silver and Diamond Star – it is meant to represent a “never Setting Star”. Another later made version is a White Maltese-type Star, set against the Golden Crown of Sweden. 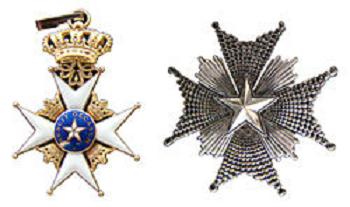