Originally a long, tapering flag – it was often split (swallow-tail) and then later rounded. Considered the most iconic of Medieval “flags”, the Standard came to be used as the symbol for a “rallying point” on a Medieval battlefield. Later used to “announce” upcoming Tournaments, their used as this caused the style of “flag” to be more recognized that the National or Kingdom “colors”. Only a “Banner” was seconded in importance on a battlefield. Often, Standards were fringed and more often hand stiched (seldom hand-painted). They were also often used to “announce” the presence of Royalty on “the field”. Used strictly for ceremonial used around the 17th Century, they were replaced by more robust and colorful battlefield flags. 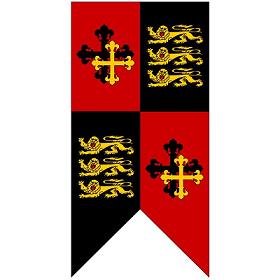