The Spanish Civil War was fought between 1936 and 1939 between The Republican and Nationalist Forces. Supported by both Germany and Italy, Nationalist Leader Francisco Franco conducted a brutal and effective campaign, which gave him a victory and control over Spain. Franco would remain in power until his death in 1975. The Flag used to represent The Nationalist Cause was patterned from the traditional Spanish National Colors. (3) Stripes (Red, Yellow and Red) were placed vertically and occupied the entirety of the Field. Rather than the Imperial Crest (which was formally used and placed in The Flag Center), The Nationalist Colors featured an Imperial Eagle with a Chest Crest. The Crest used images reminiscent of Spain’s “former” Imperial Monarchy. This was used more for “Nationalist Pride” than a “call” for the abolished Monarchy. The Center Image was enlarged and placed off-centered – closer to The Hoist of The Flag. Although not a Battle Flag, it was used throughout Franco’s reign. 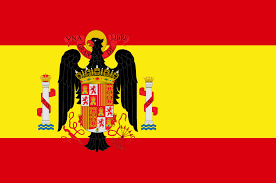