The "Castilla" was an "Aragon"-Class of Cruiser used by The Imperial Spanish Navy in the mid-19th Century. Originally planned for a retrofit into a Ironclad. This was to include 19-inches of iron plating. However, costs soon became prohibitive and she remained wooden. Built in 1881, "Castilla" was 3,300-tons displaced and was 240-feet long. She stood 45-feet tall. Her primary propulsion was a single 3-cylinder steam engine with 4 boilers. These generated up to 1,400 HP and she could achieve 14-knots. She still retained her "Barque"-style sail rigging. She crewed 400-men. One of the first vessels dried to Cuba by Spain at the start of hostilities between America and Spain in the 1890s, she fought at The Battle of Manila Bay in 1896. Severely damaged in the engagement, she survived sinking (and The War). By 1900, "Castilla" was broken up. 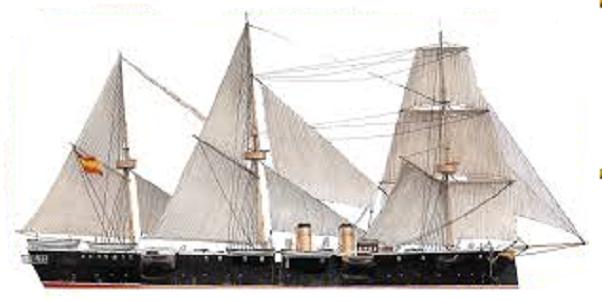