The Soviet ‘’Chaika’’ (or ‘’Seagull’’), was a mainstay Fighter Plane developed for use in The Soviet Military, in the 1930s. Rugged and dependable, The Polikaprov I-15 was also a popular Fighter used by Spanish Republican Forces during The Spanish Civil War (1936-1939). Close to 4,000 were produced during it’s operational life. So reliable despite it’s Bi-Wing design, The ‘’Chaika’’ remained in service as late as 1942. Advances in Fighter technology (as well as The American Lend-Lease  Policy of World War II), would regulate Her to the position of Trainer and eventual phasing out by 1944.

Incorporating ‘’lessons learned” from other World War I Fighters, the very small !-15 was Crewed by a Single Pilot. 20-feet long, it had a wingspan of 32-feet. The Fighter was powered by a single M22 Radial Engine capable of achieving an airspeed of 220-mph. It’s operational ceiling was rated at 28,000-feet. Armament for The ‘’Chaika’’ was (4) 7.62mm Machine Guns, arranged in typical WWI Front Pilot operating pattern. Later versions could also support up to (8) underwing mounted Rockets. Several I-15 Fighters have been restored and are still seen Worldwide at Airshows and in Museums. 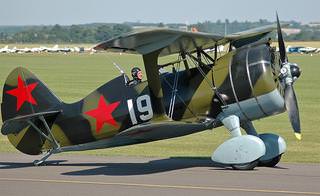