Although “any” pistol used by Naval Forces at sea could be considered “Sea Service” weapons, there were specifically made weapons identified as such. Noted for their longer, more slender barrels, Sea Service Pistols were of the Flintlock-Classification. They usually ranged from .40 to .60 caliber. Often carried in pairs (whereas each pistol carried only one shot and reloading was often not an option). Captain Edward Teach (aka Blackbeard) was known to carry 4 such. They are often identified as a “Captain's Brace” - for their use by Ship Captains. 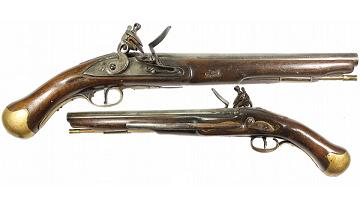