Initially developed by The Dutch around the 16th Century, they would become a popular ship-type in America around the early 19th Century. Slender and light (at 50 to 100 tons), they were ideal for fast travel as well as for carry light to moderate cargo. Often called “Packet Ships” due to their traditional small size in comparison with other ships, they rarely were designed with more than 2 Main Masts. They did use large amounts of sail however (mostly through continued wear and tear). A rare construction feat was the 7-Masted Schooner “Thomas Lawson” (1901). Massive, she sunk in a storm soon after launching. Schooners proved to ideal for Privateers and Pirates due to their speed and size. 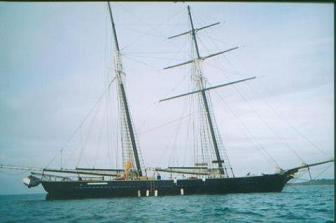