A Schanze was primarily a Germanic fortification type seen around the 15th through 17th Centuries. They were basically enclosed Redoubts (resembling a mini-Fort). They were considered temporary structures (made of earth and often reinforced with wood). In many cases, Schanze fortifications would eventually become more permanent structures (but not always). Several Schanze structures could be built independent of a larger fortification or defensive structure. They would often feature gun emplacements and reinforced walkways for riflemen (and other ranged weapons). Watch and Guard Towers could be attached as well. Schanze Forts were seen in abundance in The Black Forest as part of Germany's Medieval Frontier defensive line. 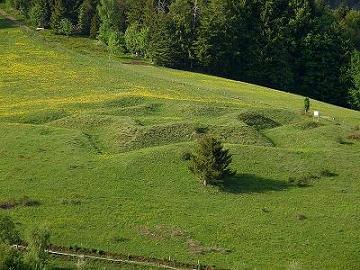