The Picts were a Celtic Tribe who lived in Scotland. Their origins are shrouded in mystery, however. They have been somewhat traced back to the 3rd Century A.D. Invaded by Ancient Rome, The Picts were NEVER conquered. They were fierce Warriors who (like Ancient Britain) – adopted the style of Blue “body paint” to project a “frightening” appearance to the advancing Legions. In the 6th Century, The Picts were divided into two Kingdoms (but this only lasted until the 7th Century, when they re-merged). Ireland began to send Missionaries into the Pict Lands to “Christianize The Heathen”. Some Pictish Royalty began to intermarry with Irish Nobility. This would create succession issues between rightful claims on both Pict and Irish claims for their own Crown. By the 8th Century, the merging of the 2 more powerful Dynasties would help to create The Kingdom of Scotland. 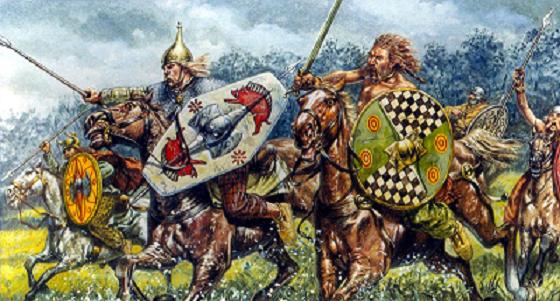