The Dega Peoples of The Central Highlands of Vietnam, were the indigenous Tribes who had inhabited Vietnam since the 9th Century. Originally a Coastal Tribe, they were pushed by invasion from The Chinese and Asian Pacific Peoples, inland. The Dega quickly adapted to their new environment . They became Masters of the Bow and Arrow, Spear and other Tribal specific weapons. With French invasion and Colonization, their contact with The Dega gave them the name in French of “Montagnard” – or “Mountain Dweller”. Resistant to foreign influence, they were mostly left to themselves by The French  (other than occasional Trade). The Montagnard did not interact well with The Vietnamese, with occasional fights over Territorial incursions.

With the start of The Vietnam War, it was determined the 1 Million population of The Montagnard were seen as a possible important Ally to America. To this end, Special Operation Forces (The Green Berets) – established hundreds of Camps throughout The Central Highlands, in order to contact The Montagnard. Unusually, they took to American contact. Given the opportunity to fight Vietnamese, many thousands of them joined with Special Operations. Although trained with American weapons, most Montagnard preferred to fight with their traditional weapons. Their fighting tactics were very similar to that of The VC. So effective, many VC were fearful of contact with them. A small Peoples, the average Montagnard Male was only 5-feet tall (with Women ranging usually 4-feet 8-inches). Montagnard Tribes were quite progressive, in that Women were allowed to fight and serve as Guides. The Women Montagnard Fighters were often even more brutal than their Male Counterparts. The Montagnard effectively helped American Forces in the suppression of NVA and VC supply and Troop movements along the infamous Ho Chi Minh Trail.

After The Fall of Saigon and collapse of The South Vietnamese Government in 1975, many surviving Montagnard feared Communist reprisals due to their assistance to America. As such, many were hunted down and killed. The US Government was only able to evacuate some 2,000. Their population would however replenish itself, so that now bear 5 Million still live in The Central Highlands, today. 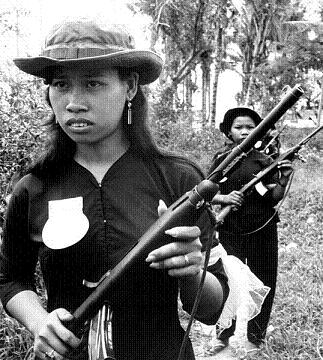