Located in Monmouthshire, Wales, Monmouth Castle was the birthplace of England's King Henry V. Construction began on the defensive structures between 1066 and 1069. It served an important point during The Welsh Marches for England. Originally built of wood, Monmouth Castle was “re-stoned” in 1150. A semi-squared structure, it's Curtain Walls are 15-feet feet in places. It featured 2 Square defensive Towers, and a fortified Bridge that lead from a Dry/Wet Moat. In the 12th Century, a Great Hall and larger “Great” Tower was added (also of stone). The successive Welsh Wars did not effect Monmouth directly. Eventually falling into English control, Monmouth was captured 3 times during The English Civil Wars. Finally held by Parliamentarian Forces, it was slighted to prevent further military use under orders of Oliver Cromwell. Another Great Hall was built in 1673, and it served as the local Assize Court (until 1725). Although by 1875, much of the original Castle and it's defensive walls had fallen to ruin. The Great Hall was renovated and occupied by a Royal Army Engineer Regiment (Headquarters). It was later abandoned and renovated into a Museum (as it stands today). 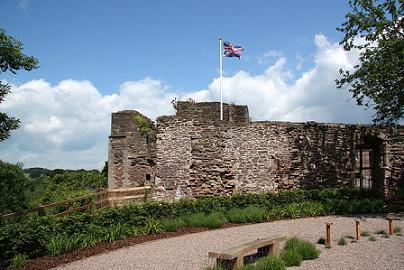