To think that a child's toy could be used as a weapon of war is not far fetched. In actuality, The sling (and resulting Slingshot), is perhaps one of the oldest of military weapons. It even served a purpose in the trenches of World War I. Used by American soldiers, The Military Slingshot was not an issued weapon. Constructed of a metal arm brace with heavy gauge rubber as it's “sling strap”, small metal ball barrings were shot (with great silence) – at enemy positions. Capable of denting an enemy helmet, they could break bones and even kill (if targeted properly). 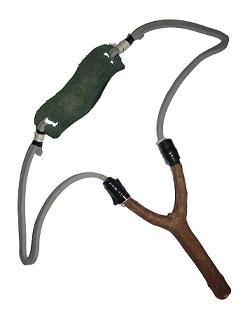