Developed around the 15th Century to counter Japanese Naval incursions – The Turtle Ship was the principle Warship of The Royal Korean Navy. Ranging from 100 to 200 feet in length and roughly 30 to 50 feet high (beam), The Turtle Ship used Oars (up to 80) and Sail power. They carried up to 50 soldiers and used both cannon and the unusual “Sulfur Gas Thrower”. Basically, this was a Dragon's head Bow carving which could emit a “sulfurous smoke” (which could conceal the ship and cause breathing problems for an enemy!). The Turtle Ship developed it's name from the metal sloping plating that completely covered the entirety of the ship's Upper deck (very much resembling the shell of a Turtle). The Lower decks featured many small firing holes (for matchlock firearms and cannon). To stop any though of “boarding”, The Turtle “Shell” covering was often spiked. Turtle Ships proved very effective in battle against The Japanese. 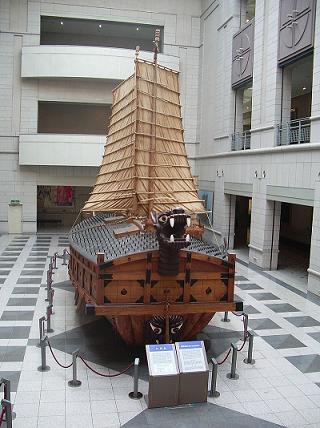