The Khant was a type of Headdress worn by The Nobility of Ancient Egypt. Made of Cloth, they covered the Crown and entirely of the head. The forehead was exposed as were the ears. Excess cloth spilled towards the back of the head, or was stiffened by organic material to form the appearance of “Wings”. The Khant was not adorned with decorations. In most cases, Gold or Silver forehead straps were placed over the Crown to stabilize it’s fit to the head. As old as 3,000 BC, The Khant was well suited for life in The Desert. It aided in keeping the Sun off the head and was able to absorb sweat. Although not worn by Commoners, Servants on some Noble Houses were allowed to wear them. Often White, other colors were used as well. 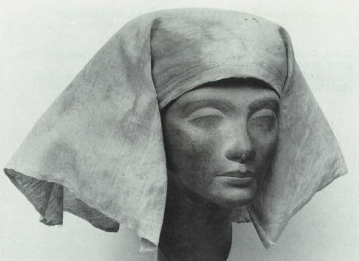