Built in 1467 in Kumamoto, Japan – this Castle was built on a hill top for maximum defensive measures. It is one of the third largest Feudal Castles still in existence. The massive structure featured 49 Defensive Turret Towers and 18 Gates (located at varying heights along the terraced defensive perimeter walls that extended from the top Donjon to the bottom basin. The Donjon is a roughly 100 feet tall (and has 6 levels). A smaller Royal Palace was constructed in the 1480s for visits from The Imperial Family. Besieged during The Satsuma Rebellion of 1877, Kumamoto Castle was severely damaged (with 13 of it's interior building destroyed and the Donjon likewise burned). Mostly uninhabited from the late 18th Century onward, the Castle underwent major renovations from 1998 to 2008 – to reconstruct the Fortress back to it's 13th Century appearances. The lower basin of the Castle has several Edo Period wooden homes reconstructed as well. 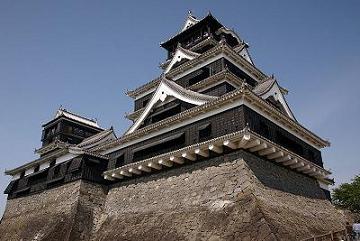