The Japanese ''Good Luck'' Flag (known as Yosegaki Hinomaru), were a type of National Flag produced for use by Civilian Family Members as a ''gift'' to a Male Relative who had volunteered for Service with The Imperial Armed Forces. The earliest such Flag Gifts were given in 1937 and later throughout World War II (1939-1945). Such Flags were mostly brought, but still many were handmade (making them more of value to a Soldier). These Flags were roughly 3 to 4 feet in length and had the image of The ''Risen Sun'' – a Red Central Circle.

On the all White surrounding Field, The ''Hinomaru'' had painted in black writing (or written in ink) – various Patriotic slogans and ''words of good luck and praise'' to The Soldier. Even Officers were given such Flags when departing for Combat (although these were often made from silk and finely made). IF a Soldier died in combat – and if possible, The Hinomaru would be sent home to The Family, attesting to His ''courage in dying for His Emperor''. In some cases though, The Flad was buried with the deceased.

During the heaviest fighting toward The Japanese Main Island, many such Flags were captured or removed from dead and captured Japanese Soldiers, by US Marines and Army Soldiers. These were very valuable war trophies. Those that survived are seen as rare and not easily purchased by Collectors. 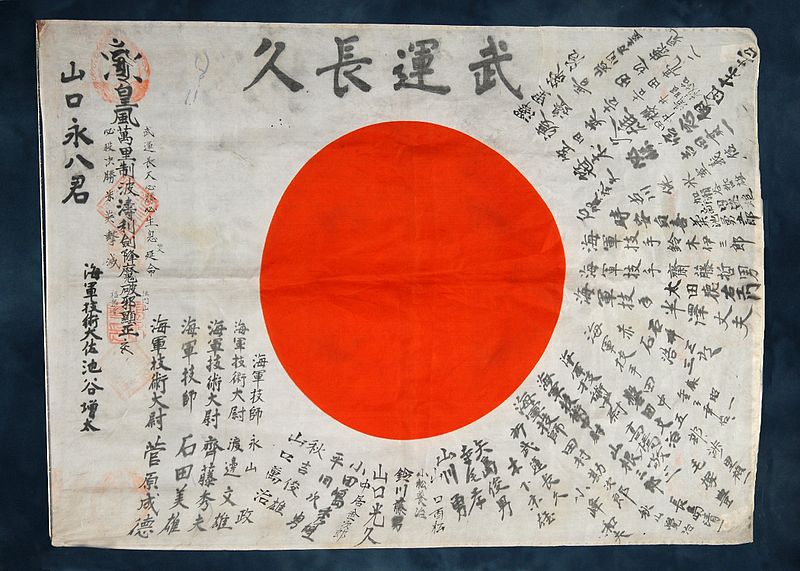