An Ultra-Nationalist Group, The Japanese ''Black Dragons'' were formed in 1901. They were said to have been evolved from several Martial Arts Organizations. The Society was extremely Nationalistic and detested any foreign influences (including peaceful trade). They wished to revert Japan back to it's former isolationist History (18th Century AD). The ''Black Dragons'' were also experts in espionage and were used somewhat extensively during The Russo-Japanese War.

During World War II, The Society became embedded into The Imperial Japanese High Command, ''helping'' to instill much of their ''martial spirit'' and the ancient Code of Bushido. The US Federal Bureau of Investigations (FBI) maintained records and surveillance of ''possible'' society Members who may have been in The United states during The War.

The Organization was outlaws by American Occupation Forces in 1946. In 1961, a Group claiming to be ''Black Dragons'' took up residence in The US City of Chicago and were blamed with trying to help incite racial disharmony within that City. The Society was known for it's Members bearing a ''Black Dragon'' Tattoo (hidden) on their body. 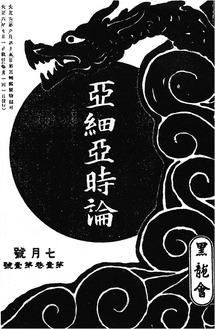