One of Italy’s most reliable Fighter Planes produced and deployed in World War II, The Reggaine Fighter Plane was an all-aluminum, multi-seater first introduced in 1940. Based on German and English Fighter designs, several European Countries were thus impressed by it’s overall maneuvering capabilities and Air Combat applications. Experts at the time of The Reggaine’s introduction touted it to be even more capable than the vaunted Messerschmitt Me 109 German Fighter in air trials. Despite her “air worthiness”, The Italian Government of Mussolini was not over impressed. Although 7 variants were produced, only 200 were produced for Italy’s War effort. The Re-2000 was 27-feet long with a wingspan of 37-feet. It was powered by a single Piaggio 14-cylinder air-cooled radial Engine, capable of airspeeds of over 300-mph. It had an operational ceiling of 13,000-feet. It was armed with twin 12.7mm wing-mounted Machine Guns. 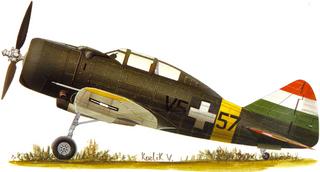