Formed and commanded by famed Italian General Giuseppe Garibaldi, The Garibaldi Infantry were used in the various Italian Wars for Independence against abused by the Italian Monarchy. Garibaldi learned his soldering craft as a Mercenary for many South American Countries before answering his Countries "call to arms". The Regiments were created in 1860. The Regiments did not necessarily have a strict uniform code, but were known for their red shirts and coats (earning them the nickname "The Red Shirts"). They did favor gray or white trousers. Several Units adopted to popular French style of The Zouaves, wearing the baggy gray pantaloons.

They wore wither s slouch hat, French Kepi cap or Fez. Armed with a variety of infantry rifles and muskets, they were also found of swords and various cutting blades (knives and daggers). Also known for their undisciplined approach to military matters, The Garibaldi Regiments were nonetheless brave and honorable fighters. A Garibaldi-style of Regiment was even formed during The American Civil War (by Italian immigrants who fought for The Union). They did not wear "The Red Shirt", but identified themselves with a small palm leave plume in their early form of headgear. The style of "The Red Shirts" used in Italian military lasted into the early 20th Century (even though The Garibaldi Regiments did not). 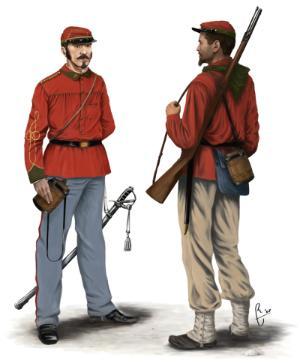