The HMS ''Alexandria'' was a British Royal Navy ''Battery'' Ironclad – which incorporated both traditional Sail technology and Steam advances. The ''Alexandra'' was also a central part in The Anglo-Egyptian War (1882). She was The Fleet Flagship in that Conflict and participated in The Bombardment of The Port of Alexandra, Egypt. ''Alexandra'' was named for Princess Alexandria of Wales (Wife of England's King Edward VII). The Ship displaced near 10,000-tons and was 325-feet in length. Her Bean stood 63-feet. ''Alexandra'' was powered by twin Steam engines and vertical Screws that could achieve a speed of close to 30-knots (very impressive for the late 19th Century).

''Alexandra'' crewed 675 Officers and Men. Her armor included 1.5 to 12-inches of iron plating throughout her Hull and Super Structure. He Armament was changed through her Service, but when she was launched she carried (2) 11-inch Cannon, (10) 10-inch Guns and (6) Torpedo Launchers. Launched in 1877, HMS ''Alexandria'' would continue to serve in The ''Middle East and Africa'' Squadron. Later in the 1890s, She was transferred to The Reserve Fleet (also serving as a Training Ship briefly). At the beginning of the 20th Century (1900) – although aged, the massive ''Alexandria'' finished out her Service as a Coast Guard Ship off of Portsmouth, England. She was finally decommissioned in 1903 and broken up in 1908. 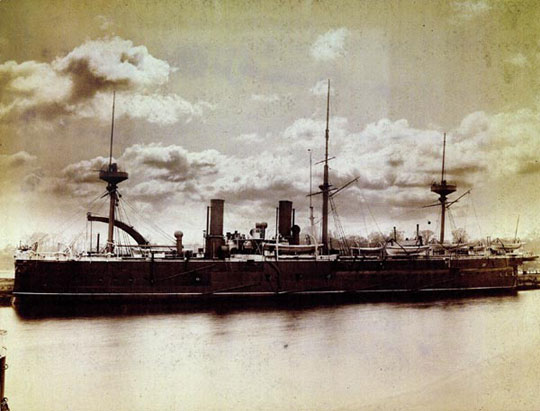