Located in Monmouthshire, Wales, Grosmont also lies very close to the “Marcher Town” of Herefordhire, England. Designed to protect The Monnow River, Grosmont Castle was built on the site of a much older Norman defensive structure (wooden). By the late 13th and early 14th Centuries – the “current” stone Castle was raised and competed. Part of the aforementioned “Three Castles” Defensive System – Grosmont supplied support to Abergavenny and Hereford Castles. Grosmont was noted for it's reddish hue (due to the sue of local Red Sandstone). A “Squared” Castle in design, it also featured 4 ”D”-Shaped (Horseshoe) Defensive Towers (located at each Curtain Wall connection point). A primary Gatehouse was constructed for access into and out of the Castle. Held under English Control, a 1,900 Welsh Garrison attempted to defend again English Forces (which may have been commanded by Prince Henry – later King Henry V). The siege would end in 1405 with near 1,000 Welsh defenders killed. Grosmont Castle from that point forward lost it's importance (as did the others in The System). It was allowed to go into ruin. By the 16th Century, Grosmont was near completely ruined, It fell under State Control in the 1930s. What survives is all that could be conserved. 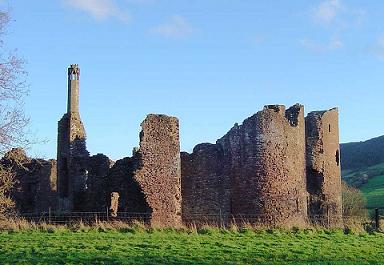