Adopted as a Colonial Militia Flag used by Vermont's “Green Mountain Boys” Infantry – The flag was first seen around 1776. It was still used by the Unit until the end of The American Revolution. The flag features a solid green field with a blue upper left quadrant. The quadrant features 13 5-pointed white stars (arranged in a “natural” position). The Green Mountain Flag is also considered an early “front runner” for National adoption. It was also used by Vermont State Militias during the American Civil War as a “Regimental Standard” in lieu of the State Flag. A portion of one of the original Revolutionary Era  flags still exists. 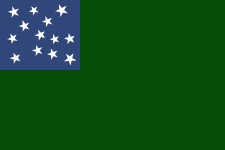