Located in Ghent, Belgium – Gravensteen was constructed in 1180. It's initial design was based on 2nd Crusade structures seen in the Middle East. Originally a wooden defensive structure, Gravensteen is a partial Moated Castle. It features a double defensive perimeter wall system roughly 35 to 44 feet high. The walls feature 12 Rounded and Squared Defensive Tower Turrets incorporated into the wall system. Gravensteen is unique in that it features both a Central Keep and Fortified Manor House. Originally designed to support a Chapel, Blacksmith and other necessary “Castle support buildings”, Gravensteen served as the seat of Power for most of The Counts of Flanders until the mid-14th Century. It was not occupied past that point and decayed from lack of use. It was renovated in the 18th Century and used a Prison (and a Glass Factory in the 19th Century). Gravensteen was renovated again in the early 20th Century and serves as a Tourist attraction. 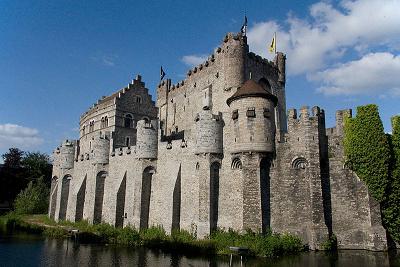