To be Granted Arms was the procedure by which a person was legally awards a Coat of Arms. The Granting of Arms was used for NEW Arms Holders. The practice of “Confirmation of Arms” was used for previous Holders (often receiving another Achievement). The issuance of a document called a “Patent Letter” is issued by a College of Arms (under the order of the bestowing Party or Institution). This document will typically show the Arms granted as well as a Citation of Issue. The Letter will carry affixed “Seals of Authority”. The practice would evolve into the practice by which say a Soldier or Sailor is issued a Military Medal. The accompanying “Citation” of those Medal Awards were based on The Grant of Arms. 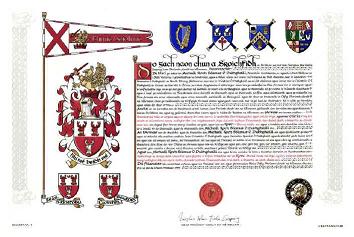