The German Vessel ''Deutchsland'' was a submersible Merchant Ship operated by The Lloyd Shipping Company. She was launched from Bremen, Germany in 1916. Her primary goal was to navigate through The Entente Blockade established by Allied Powers during World War I. Whereas at the time, The United States was a neutral Nation in The War. The ''Deutschland'' ran cargo and carried supplies between New York and Germany. While The Allied Powers argued with America that the use of Submarines for cargo purposes was still the same as allowing Warships free passage, The US declared that as long as such Vessels were not armed, they could be treated as Merchant Vessels nonetheless. It was a cause of friction between The Allied Powers and America. ''Deutschland'' was over 1,800-tons displaced and measured 213-feet in length. Her Beam was 30-feet. A Twin Shaft system (Diesel), she could achieve 24-mph on the surface and 10-mph submerged. Her depth rate was 160-feet. She crewed 56 Officers and Men.

The ''Deutschland'' made several successful runs running and carrying cargo despite the best efforts of The Allied Powers to sink her. However by 1917, and with The US entering The War as an Allied Power, She was taken over by The Imperial German Navy as a Warship. She was renamed ''U-155''. ''Deutschland'' scored an impressive 130,000-tons of Allied shipping in attacks. Now armed with (18) Torpedoes and several 5.9-inch Deck Guns, She was a formidable force in The Atlantic. Surrendered in 1918 at the end of World War I, ''Deutschland'' was taken by The British, were she was a War Trophy/Display Ship on The Thames River (London), until 1921. It was decided to eventually scrap Her. During the process however, a mysterious explosion occurred which broke Her in half, killing five workmen. 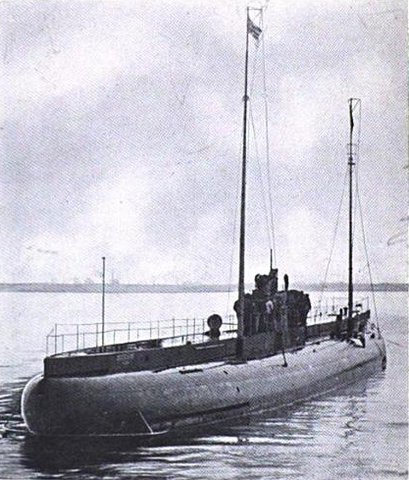