Officially adopted in 1919, after World War I, by The Weimar Republic (after World War One). It replaced The Imperial German Tricolor (adopted in 1892). This version harkened back to The German Unification Wars of 1848 and 1871, when the Black, Red and Gold (3-Striped, horizontal) Colors was created to symbolize that struggle. After the death of German President Paul von Hindenburg in 1933, then Chancellor Adolf Hitler abolished the National Flag, briefly using The Imperial Colors od 1892 (Black, White and Red), until it too was replaced by The NSADP "Swastika" Flag. The Black, Red and Gold Tricolor Standard was yet again re-adopted by The German Parliament in 1950, and is still the current National Standard of Germany. 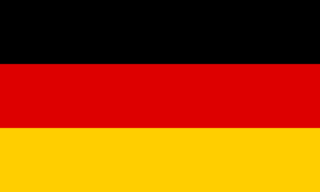