The German ''High Seas Fleet'' Badge was a Combat issued Service Award of The Kriegsmarine (Navy), during World War II. It was first awarded in 1941 as a means of awarding German Sailors (Officers and Enlisted Class), who ''struggled against The British Fleet''. In addition to ''Combat Qualification'', a German Kriegsmariner had to have been assigned to wither a Battleship of Heavy Cruiser. It was considered ''below'' The German ''Iron Cross'' Award. The Badge is a circular device which featured a Silver Metal Center – portraying the frontal view of a stylized German Warship. This image was encircled by a Golden Wreath, which was connected with a Golden German Swastika insignia. The High Seas Award was rendered obsolete when The Kriegsmarine was disbanded at the end of World War II (1945). 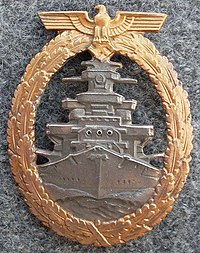