One of the last of Hitler's "Super Weapons", The Heinkel He 162, was a short lived rocket fighter, first prototyped in 1944. Nicknamed "The Sparrow" and "Salamander", it's most common designated was "The Volksjager" or "People's Fighter". The He 162 was a Fighter/Interceptor that used a single top fusilage mounted BMW 003 Turbo Jet engine. Capable of a top speed of 470 mph, it required a take off range of 1,640 feet. It had an operational ceiling of 40,000 feet. Only 320 were made, with 10 lost in actual aerial combat and many others lost to pre and post landing/take off accidents.

The majority of the cheaply produced Jets were constructed in underground complexes. This was due to heavy Allied Bombing of not on this Project, but many other "Jet" production factories. The He 162 was also unique in that it was made of a wood-metal composite. It was 26-feet long, with a 19-foot wingspan. Ideally, it carried twin 20mm Cannon and multiple 108 mm Machine Guns. It was also a single-seater Fighter, which also utilized a primitive form of ejection seat.

Actual combat operations for The He 162, was in January of 1945. It's induction into The War (to last only 3 months more), was negligible. Survivors were captured by The Allies (which too helped advance their own Jet Aircraft advancements) 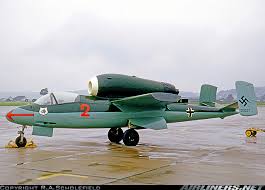