Developed and produced in 1916, The German Albatros was supposed to be a premier Scout/Fighter Plane. A single-seater aircraft, The Albatros was noted for it's heavy attempts at camouflage. Small by comparison with other fighters, The Albatros was close to 30-feet long, with a 30-foot wingspan (bi-winged). They had a maximum speed of 116-mph at full throttle. The operational ceiling of The Albatros was around 10,000 feet. Equipped with twin Spandau 7.92mm fuselage mounted machine guns. An issue with excessive turning in flight caused structural stresses that did cause The Dv (a) Class to literally "fly apart" (as frequently reported) . Nonetheless, The Albatros was an effective German Scouting craft, which saw some 1,500 production models deployed to The Western Front. 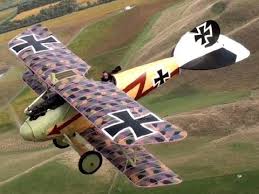