Many Royalist Units raised in the “outer” Regions of England during The Civil War tended to use a light blue and gold motif in their battle and field flags. The Gerald Flag (named after Sir Charles Gerald),is one example. As tradition, the Cross of St. George symbol was featured in the upper left Canton of the flag. A quartered and alternating light-blue and gold field occupied the remained of the flag. Many used other individual insignia set in the center of the flag (Rank Coronets, etc). The Gerald Flag's blue matched the standard coat color of all his Regiments. They were active from 1642-1645. 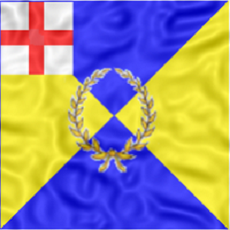