A product of The Vespa Scooter Company of Italy was to provide an affordable form of reliable transportation for everyone. When production Contracts were given in France, the lightness and all round dependability of the Scooter gave birth to a form of Military transportation. The result was The TAP 150 Scooter, designed for use by French Army Paratroopers upon landing and commencing Operations.

First deployed in 1956, The TAP was seen as a plausible platform to support a 75mm Recoilless Rifle Tube. This allowed for a Rider to be able to engage Enemy Armor and escape without immediate harm (due to the speed of The Vespa). Light enough for airborne cargo transportation, The TAP 150 could be air dropped in with deploying French Paratroopers. It also allowed for effective Scouts who had the ability to engage an Enemy of needed.

TAP Units operated in 2-Man Teams of Scooters. One manned the Recoilless and the other carried rocket shells. Later 1959 versions were modified to also carried The Model 1917 .50 Caliber Browning Machine Gun.

A 146cc 2-stroke Engine, The TAP 150 us gasoline and could maintain a ground speed (open) of 60-mph. The TAP could not be fired while in motion. 600 Models were deployed with French Forces until they were discontinued in the 1960s. 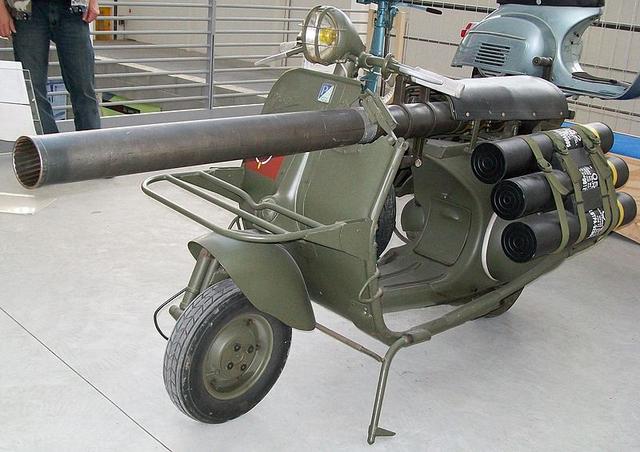