French Order of The Holy Spirit

Instituted by Henry III of France in 1578, The Order was meant to replace The Order of St. Michael. Both of which were religious-based awards (Catholic) – given to only the most trusted members of French Nobility. The investment of The Order was seen as a great honor, especially during France's Wars of Religion (1562-1598). Using the Ranking structure of Knights and Officers, The King was seen as a Supreme Knight Commander (with The Pope as it's Grand Master – although was not sanctioned by The Holy See). The Badge was a White Maltese-type Cross with an inverted Dove (to represent The Holy Spirit). The entirety of the Badge was encircles with Golden Fleur-de-Lys (the symbol of France). It was abolished by The French Revolutionary Government in 1830. 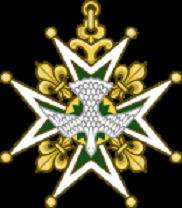