Created by The French Government in 1915, this Award was given to French Soldiers (initially), for acts of “heroism involving enemy combat”. In addition, persons (or Units) – mentioned in official Dispatches (along similar lines), can be awarded the Medal. The Croix de Guerre was commonly given to Allies (both individual soldiers and Units), in recognition of their service to France (in combat). The Medal is an uncolored Maltese Cross with crossed Swords behind. The profile of “Liberty” in stamped in the center. The cloth portion of the Medal (ribbon) is Dark Green and Red. It was a high prize for French World War I soldiers and Airmen. 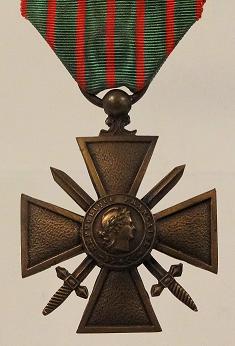